Today we continue the saga of things I was supposed to write down but didn’t, for reasons unknown. Suppose you migrated your OSSEC management server, or freshly installed what will be the new manager on a new OS. You import the keys, as described in my previous post, but the connection fails for one or both of these reasons:

This has happened several times over the course of the last decade, due to client/server version mismatch, drive failures, and what have you. There’s a pretty brute-force way to solve these problems, though:

Today I started searching for an old article of mine in regard to guest Windows VMs and the troubles with pass-through Nvidia cards. Picture me surprised when I found out that I never actually posted it, although the article has been in the back of my mind for the past two years or so. So, I’ll write it right now, since it contains valuable information that might help some people.

There are only a handful of problems with PCI pass-through of video devices:

So, here are fixes for the problems above, same numerical order:

There are various arbitrary sources that can tell you why MSI is better than the default line-based counterpart, but when it comes to virtualization I can tell you the top reason why you want to switch to MSI: line-based is unstable. I’ve used my virtualized main workstation/gaming station for a while now, and the only times video card had troubles or the entire VM crashed, was because something between the drivers and the pass-through of the IRQ interrupts in line-based mode failed hard. Since the discovery of MSI I stopped having issues with the video card and everything runs butter smooth.

Checking is fairly simple, just open Computer Management’s Device Manager, and check if the NVIDIA Geforce <whatever> and the relative High Definition Audio Controller have a positive or negative value.

If the value you see is greater than zero, you should switch to MSI. In order to do that, you need to open the device properties and find the device instance path: 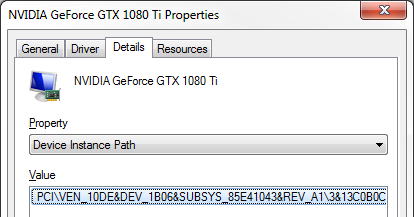 With that in hand, you can open HKEY_LOCAL_MACHINE\SYSTEM\CurrentControlSet\Enum\PCI path in the registry, and follow the device instance path to find the following:

With MSI disabled you will notice that the MessageSignaledInterruptProperties key is missing, as you will need to create it along with the DWORD MSISupported set to 1.

That’s all there is to it. You can now reboot the system and the drivers will use MSI mode. Any audio crackling coming from the monitors will be gone, and everyone will rejoice.

Wrangling obscure OpenSSL functions to create and publish SSL certificates has always been kind of a mess. If you want(ed) to create a valid self-signed certificate for multi domains or, at least, example.com and www.example.com, you most likely were out of luck.

There is a lot of wrong or partial documentation on the subject, but is… well… wrong and/or incomplete. It is thus time for another episode of AntiFUD.

You have multiple paths of the same website to cover for, but a single CN. If you use example.com then www.example.com will result in invalid SSL certificate, and vice versa. Suppose you have the following domain names:

In such a scenario there is no real victory no matter what you choose to use as a CN: the most used wildcard CN, *.example.com, is of no use either because it matches with www.example.com and user.example.com, but not with username1.user.example.com. The only way to address all these issues is to create and sign a X.509 v3 SSL certificate, to allow SAN. The SAN extension has been introduce to resolve all of these problems, allowing the validity of multiple domains/subdomains within the same certificate.

We have to start by creating an alternative configuration file to use with OpenSSL, and list the server names we need. As mentioned below we also have to enable the usage of v3 extensions.

We can now edit the file and adjust as needed:

In the default file, parameters such as req_extensions and keyUsage are commented out, while subjectAltName is missing. We have to add it to v3_req and v3_ca, and create the respective section. It can be created anywhere in the file, but it is generally appended to the bottom. Since the CN is (or, at least, should be) ignored in the presence of SAN, we insert all the names in the alt_names field.

With the configuration in place we can now create the certificate:

The deviation from the standard procedure is the addition of the v3 during the CA sign. We do this by using -extfile example-com.cnf to use the custom configurations, and specifying -extensions v3_ca to make sure SAN are passed through and saved in the signed certificate.

To make sure it worked you can do the following:

The only thing left to do is to set up the certificates in the server, and everything will work as intended.